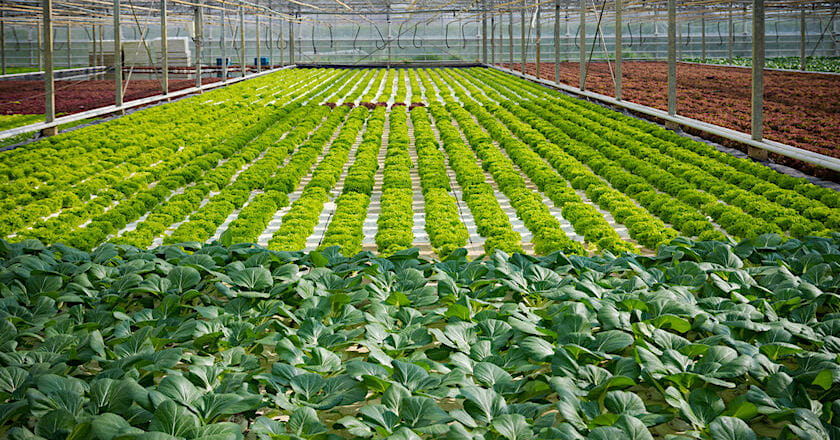 One of the most popular justifications for eating animals that we encounter from the “ethical meat” crowd is that “livestock can be grazed in areas where crops can’t be grown,” a.k.a. “marginal lands.” 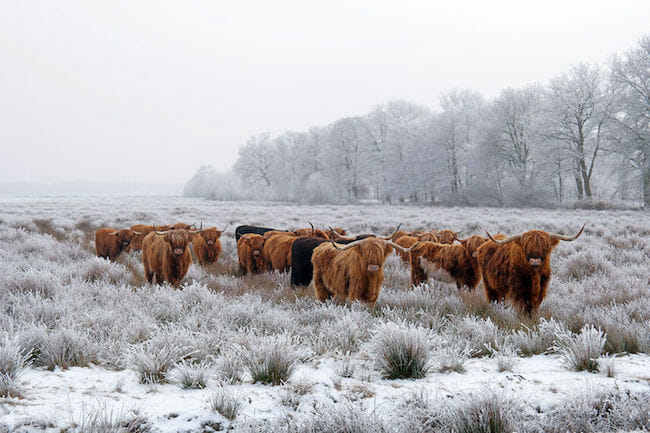 Bear in mind that many of the folks asserting this argument live in regions where crops can and do grow in abundance, making this in many cases a disingenuous justification for exploiting and killing animals we have no need to use or harm.

Beyond its use as mere deflection, though, there are several flaws with the “marginal lands” claim as a default justification for farming animals, including the fact that in many so-called marginal landscapes, native fruit and nut trees thrive, and in colder regions, specialized cold-climate crop farming techniques can produce abundant yields. 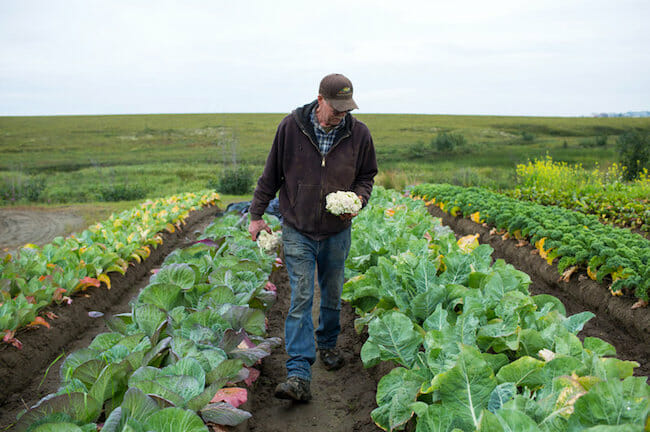 Indigenous Alaskan chef Rob Kinneen points to Bethel, Alaska farmer Tim Meyers as one example of the latter: “Ninety-six percent of the food in Alaska is imported, which leads to questions about food security,” says Kinneen. “Tim Meyers is growing produce on the tundra. He uses cold-climate farming techniques and grows on a nutrient-rich riverbed. The produce is preserved in an underground cellar with a drip oil pan stove that keeps temperatures at about 34 degrees. If you can successfully grow vegetables in a place like Bethel, I think you can do it almost anywhere.”

Another viable technique for producing fruits and vegetables in inhospitable conditions? Greenhouses.

Greenhouses Instead of Slaughterhouses
Innovations in greenhouse technology are making it increasingly possible to grow plant foods sustainably and abundantly in regions where they have not previously grown well or at all, including Antarctica, Iceland, Holland, and Las Vegas, to name just a few. And greenhouse farming can be done using only a fraction of the land, water, energy and other resources animal agriculture uses.

While not all greenhouse producers currently opt for the “greenest” growing techniques, many do, and large-scale greenhouse farms that prioritize renewable energy sources are on the rise.

Take Holland, a country described in a recent National Geographic piece as “bereft of almost every resource long thought to be necessary for large-scale agriculture. Yet it’s the globe’s number two exporter of food as measured by value, second only to the United States, which has 270 times its landmass. How on Earth have the Dutch done it?”

They’ve done so largely through a mind-bogglingly vast (and visually stunning) array of greenhouse farms, glittering complexes growing a wide variety of vegetables on only a fraction of the land required for field cultivation of the same produce. 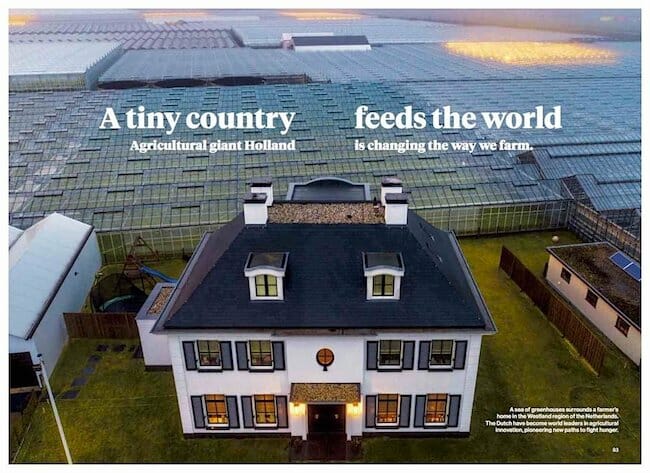 “These climate-controlled farms enable a country located a scant thousand miles from the Arctic Circle to be a global leader in exports of a fair-weather fruit: the tomato. The Dutch are also the world’s top exporter of potatoes and onions and the second largest exporter of vegetables overall in terms of value.”

But can they do so sustainably?

Renewable Energy: Sun, Wind, Even Volcanoes
In 2000, the Dutch famously declared a commitment to becoming international leaders in sustainable agriculture and global food security, adopting the slogan, “Twice as much food using half as many resources.” The 36-acre greenhouse farm of the Duijvestijns family in Delft, Holland, specializing in award-winning tomatoes, seems to bear this promise out. 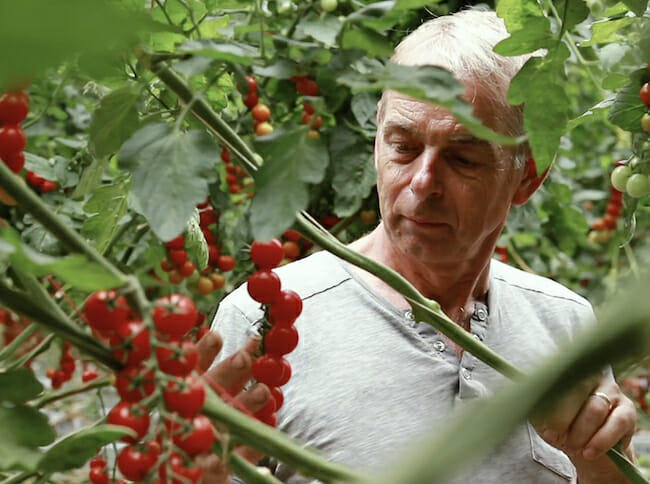 “[T}he Duijvestijns have declared resource independence on every front. The farm produces almost all of its own energy and fertilizer, and even some of the packaging materials necessary for the crop’s distribution and sale. The growing environment is kept at optimal temperatures year-round by heat generated from geothermal aquifers that simmer under at least half of the Netherlands.

The only irrigation source is rainwater, says Ted, who manages the cultivation program. Each kilogram of tomatoes from his fiber-rooted plants requires less than four gallons of water, compared with 16 gallons for plants in open fields. Once each year the entire crop is regrown from seeds, and the old vines are processed to make packaging crates.”

Iceland is another country making great advances in greenhouse food production via geothermal energy— in this case, they are harnessing heat from the country’s abundant volcanoes to sustainably grow fruit and vegetables year-round in a region where months dominated by darkness and below-freezing temperatures have historically dictated a short growing season.

“(Before), you were picking the last tomatoes in November and next you pick in April. Maybe 20 years ago, it was like that,” says greenhouse farmer Pall Olafsson.

Writes journalist Thin Lei Win: “Olafsson credits the hot springs that bubble up from the earth a short distance away with turning Hveravellir into one of Iceland’s biggest vegetable farms, producing about 500 tonnes of tomatoes, cucumber and paprika a year.

The naturally hot water is piped in to heat the greenhouses and the hot springs are also a key source of power for the artificial lights that help farmers grow their crops even in winter, when the island sees barely three hours of sunlight.” 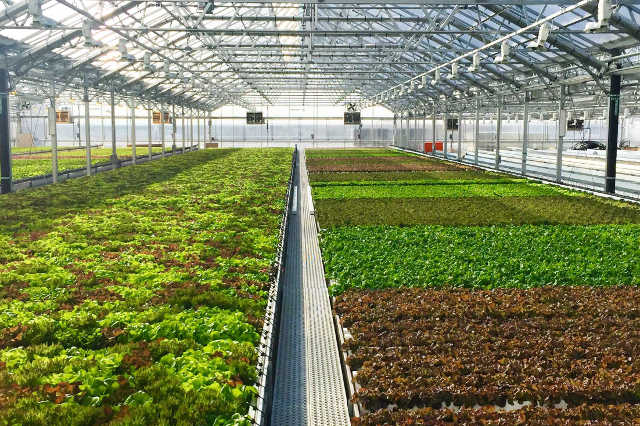 In the U.S., greenhouse farming is giving a new face to the notion of “local, sustainable food.” Gotham Greens, which own greenhouse farms in Brooklyn, Chicago, and NYC, capitalizes on the “farm to fork” philosophy, with minimal food miles traveled between production facilities and the restaurants and grocery stores they serve. The company, along with many like-minded peers popping up across the country, markets itself as a local alternative to growers in California and other warm Western states who have traditionally provided the Northeast and Midwest with the bulk of their produce outside of the growing season.

With many prioritizing solar and wind energy, these greenhouse farms can not only drastically reduce shipping miles and fossil fuel use, but also water use, via recirculating water systems (which also eliminate pollution from agricultural runoff). 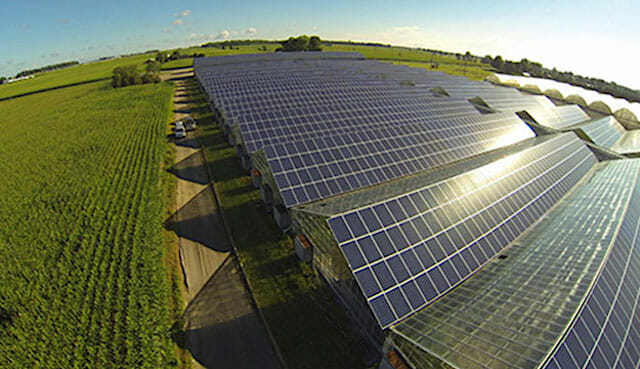 “While a conventionally grown head of lettuce uses about 13 gallons of water to reach maturity, in an Urban Seed greenhouse, lettuce will grow on just 22 ounces,” writes Urban Seed, which operates greenhouse farms in Las Vegas, Nevada. “How do we save more than 90% water than traditional farming and 40% more than hydroponics? Create a closed loop system. That means all of the water that goes through our system is recollected, filtered and distributed. The only water that we do not capture, the plants do.”

Then, of course, there’s the land.

Animal agriculture currently uses about 83% of global farmland, but provides just 18% of our calories. In a 2018 Oxford University study being called the most comprehensive analysis to date of agriculture’s environmental impacts, the researchers concluded that if meat and dairy production were replaced with plant-based farming, global farmland use could be reduced by more than 75% and still feed the world.

Greenhouse farming multiplies these inherent efficiencies. Gotham Greens’ facilities “yield about 20-30 times more produce per acre than field farming — and they’re even on rooftops, on land already being used for something else.”

While no one is suggesting that greenhouse farming is the best or only way we should grow food, it is definitely emerging as a significant player in the local and sustainable food movements, paving the way for production technologies that are in many cases far more environment- and climate- friendly than even the most “low impact” forms of animal farming.

But are greenhouses natural?
For any who might argue that greenhouse farming isn’t “natural,” consider that farming animals isn’t any more “natural” in this sense, nor is domesticating them; far from it. What is “natural” about forcibly breeding billions of animals into a brief, captive existence in order to exploit them for their flesh, breast milk, and ovulations, none of which we need to survive?

Too, consider that most of the farmed animals used in the Americas are not even native species, but were introduced as a result of colonization. 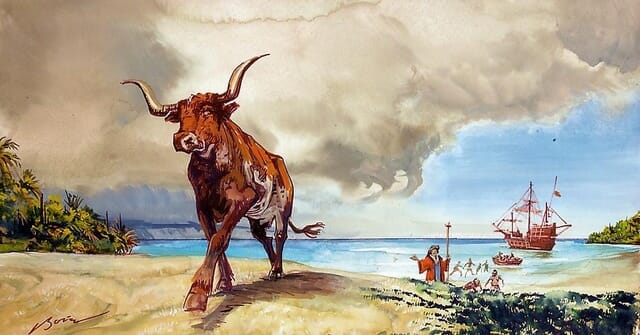 In a letter to the Crown, a Spanish official wrote, “May your lordship realize that if cattle are allowed, the Indians will be destroyed…”
When Columbus and his crew arrived in Mesoamerica, the land was abundant with native crops, but the colonizers deemed indigenous foods ‘inferior’ and began shipping over domesticated cows, pigs, sheep and goats to be farmed for their flesh and milk. Huge tracts of land belonging to indigenous populations were designated by the colonists as “livestock ranches” for grazing, and in addition to seizing these lands, colonists allowed their herds to invade Indigenous croplands, destroying their primary food source.

This article by Linda Alvarez, Ph.D. is a harrowing and instructive look at how food was used as a form of colonizing power against indigenous groups, erasing their foodways, their land rights, and eventually entire communities as they succumbed to malnourishment and starvation, their agricultural holdings trampled, consumed by grazing animals, or stolen for cultivation of Spanish crops.

It’s important to note that the purpose of taking a closer look at “the case from marginal lands,” and similar claims used to justify the farming of animals, is not to imply that it is possible to be vegan in every area of the world, nor that such a lifestyle is equally feasible and accessible to everyone. It isn’t.

But it’s helpful to acknowledge that many of the scenarios used to justify exploiting animals for food do not reflect a fair accounting of all of the animal-free food production methods and examples available to us, from long-standing cultural traditions of primarily plant-based cuisine, to innovative technologies that are ushering in an undeniably kinder and more just and sustainable way of eating.