Bandit was a jail dog – he’d been in the Gwinnett Jail Dog Program for about five and a half years where he’d been living with inmates who trained him through the jail dogs program in hopes of getting him ready for a forever home. 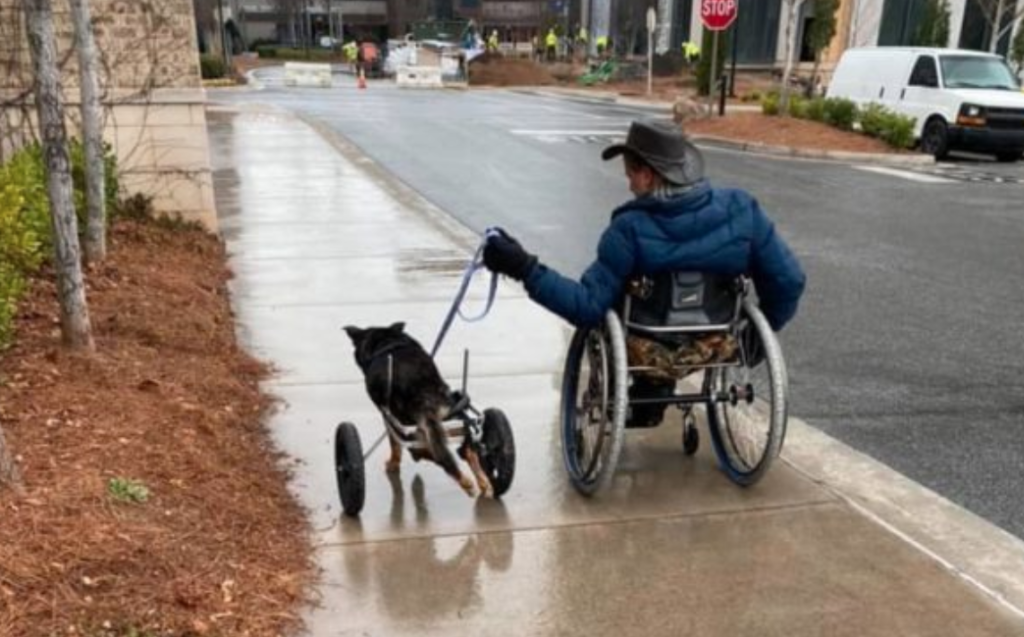 However, there was something unique and special about Bandit – he had special needs. The adorable little dog used a wheelchair to get around, something that caused his adoptions to never work out.

You see, through no fault of his own, Bandit had been adopted on three separate occasions by three different families. Each time, it didn’t work out as they couldn’t keep up with his special needs, so they brought him back to jail every time.

But then Bandit found his perfect match in a Georgia family.

As his new owner, Darrell Rider, explained, ‘When you look at Bandit, if he was human, he’s me.’

Darrell knew all that Bandit was going through, as he himself had been paralyzed from his waist down since birth. It was that special connection and similarity that Darell shared with the 10 to 12-year-old Bandit, that made them the perfect pairing.

‘Going through what I went through growing up, life wasn’t easy but you just gotta continue going forward. The things I read about Bandit, the videos we saw, he kind of had the same mindset that I had,’ Darrell shared.

WSB-TV was there to capture the moment at the prison when Darrell and his wife, Sue, arrived in order to get Bandit and bring him home with them to start a new life.

The couple revealed that they had been considering the adoption for a long time, deciding if they were able to take on Bandit’s special needs or not. In the end, they concluded that they could.

‘This is something that would motivate Darrell and it would help Bandit to know he’s not alone out there,’ Sue commented.

Bandit’s prison handler, Brandon Tredo, was both happy for Bandit getting a forever home, but also sad to see his buddy go.

As Tredo shared, ‘As soon as I found out he’s being adopted, I’ve been trying to love him more. Just, that’s my friend.’

The big day was a special one for Bandit. It marked the start of the rest of his life in a loving family that would understand and is willing to care for his many needs. And there was even more good news for the adorable dog – not only was he getting a forever home, but he was also going to have three new brothers and sisters as well!

“How can you not fall in love with him?” mentioned Darrell.

Bandit definitely stole his new family’s hearts, as well as the rest of ours.