When 57-year-old teacher Hilary Barrows could no longer afford her apartment in France, there was no question in her mind that her dogs were going to stay with her no matter where she ended up.

With so much uncertainty, she got her dogs, Robbie and Cleo, packed up and in the car where the three set off from France to Denmark in search of English teaching jobs. Having nowhere to stay, she ended up spending a lot of nights in the car with her dogs. 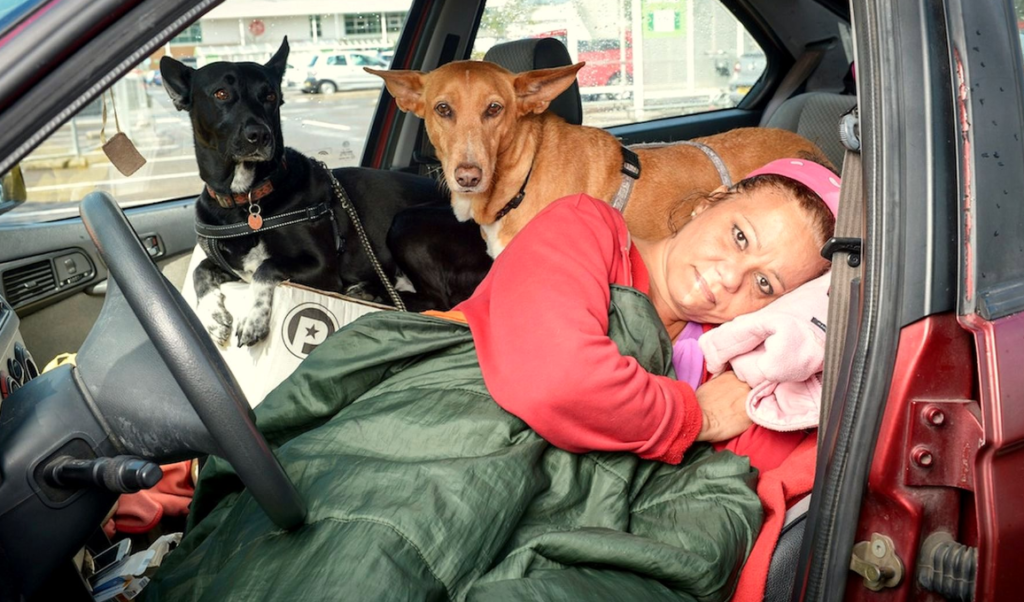 However, when a job opportunity ended up falling through, Barrows had no choice to return home to the UK. On the drive back, Barrows stayed at a lot of Salvation Army shelters, where she had to leave her dogs overnight in the car.

Barrows explained to The Dodo, ‘I cannot tell you the humiliation I felt staying here. Despite the warmth and food, these places made me feel worse about myself. I was trading my dignity and independence for a bed and food.’

In order to get her dogs the proper vaccinations that she needed in order to re-enter the UK, Barrows found herself having to sell off family jewelry. However, her struggles were far from over – there were more to come once she was back in the UK.

Barrows was offered emergency housing, but it came with a stipulation: she had to give up Robbie and Cleo.

As she later stated, ‘I refused to give them up for rehoming. I was just about at the end of my rope. Only my dogs kept me going.’

Barrows still had her car, so she was living out of that. However, she was unable to find work since she was unable to provide a permanent address. Through it all, she would often skip meals in order to make sure that Robbie and Cleo had enough to eat.

I had to ask a lady for a £1 when I was in the parking lot to feed my dogs. I felt absolutely like a loser. I could not let my dogs go hungry, Barrows said.

Barrows’ luck finally took a turn for the better when she was featured in an article by her local paper. They helped to shed some light on the horrible merry-go-round cycle that she was on, and the article had some positive ripple effects for Barrows and her dogs.

Barrows added, ‘I also decided that I could help others with my story. Many homeless people have pets and these pets are their lifeline. My dogs are the only thing that kept me from suicide. I could never abandon them.’

Barrows had set up a GoFundMe in order to help her collect money for rent, but she was overwhelmed by the kindness and support shown to her from strangers all over the world. She was even offered a temporary place to stay by a local dog trainer who also runs a shelter. All the support and love from people and fellow dog lovers in the community helped Barrow to eventually get back on her feet, as all she wanted was just to be able to provide Robbie and Cleo a stable home.

As Barrow shared on her fundraising page – which has since been deleted – ‘I promised to love and protect my babies until the day they pass on. They need me and I need them.’

15 Photos Of Dogs Before And After Adoption